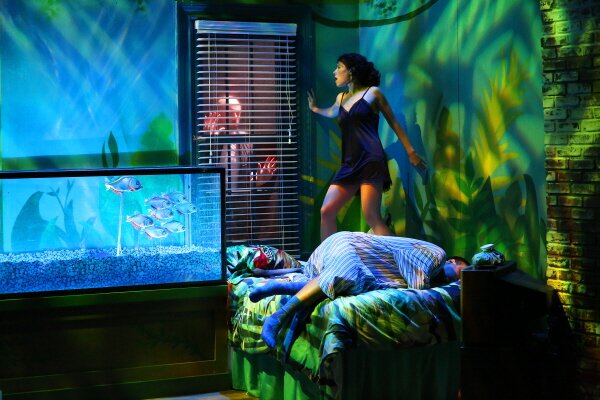 Ridiculous Theatre legend Charles Ludlam’s The Artificial Jungle is essential queer theatre viewing – and one hell of a lot of fun. The late, great Ludlam founded the Ridiculous Theatrical Company 50 years ago, creating a singular style of campy but rigorously structured theatre committed to outrageousness without apology, but also without any kind of knowing wink.

Jungle was Ludlam’s final play and mercilessly yet lovingly parodies film noir. As was often his wont, Ludlam turned to an older and more sturdily built model, Émile Zola’s Thérèse Raquin – a tale filled to bursting with lust, murder and horror – for the plotting. For the dialogue, however, he takes film noir‘s “hard-boiled” schtick, turns the heat all the way up and lets the whole thing boil over.

The director for this production is Ludlam’s husband and muse, Everett Quinton (whom I have had the great pleasure of working with several times). Everett is the ideal interpeter of Ludlam’s plays, knowing when to be loyal to what Charles had already done, and when to push things even further into preposterousness to keep it fresh.

Quinton has a marvelous cast to work with, who seem to truly get it. David Harrell takes on the role Ludlam wrote for himself, Chester Nurdiger, the schlubby, happless owner of a New Yawk pet shop, and Harrell gleefully puts the “nerd” in Nurdiger. Alyssa H. Chase plays his frustrated housewife Roxanne with energetic and angular vampiness. Hunky Anthony Michael Lopez takes Quinton’s role, Zachary, an interloping hired hand, which he delivers with muscular intelligence. Anita Hollander takes the one-time drag role of Mother Nurdiger, and puts it across with an appropriately drag-sized performance. Rob Minutoli has terrific comic timing in the small role of Officer Spinelli.

A key part of the action is a tankful of piranhas, which designer Vandy Wood has crafted with the obvious theatricality that is such an important part of the Ridiculous aesthetic, and which puppetmaster Satoshi Haga imbues with surprising expressiveness and personality. Hilarious, and highly recommended.